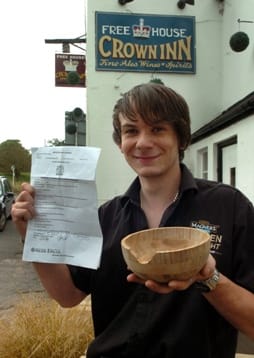 YOU CAN'T BE SERIOUS: Bar manager Mark Badham with the search warrant. He was at the pub when the police arrived to search for the Nanteos Cup. ()

LANDLADY Di Franklin got a shock when she turned up for work at The Crown Inn, Lea, on Sunday to be confronted by 12 burly police officers at the door – searching for the Holy Grail! West Mercia police officers had received a tip-off that the stolen Nanteos Cup had been seen in the pub, having recently been taken from a home in Weston-under-Penyard. Legend claims that the Nanteos Cup is the goblet that Jesus drank out of during the Last Supper. It belongs to Lady Fiona Mirylees, but was stolen from her home last month. Di explained: "The police said that they'd received information that the Nanteos Cup had been seen in the pub and was still here, so they executed a search warrant to try and find it. "If it had come here it would have gone in the fire! It's not even a whole thing now, it's about a third of an old cup."

No more deaths recorded in the Forest of Dean

For the full story read The Forester